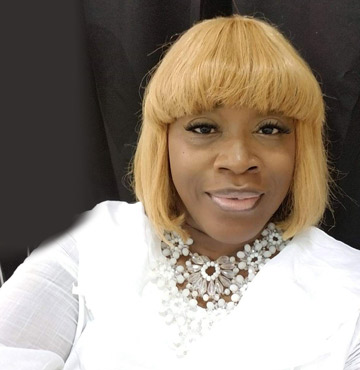 As the Founder and CEO of Successful Start Inc., which is the ; God has gifted Ann with the uncanny ability to do business for His glory! Ann Taylor – a native of Panama, was born the first of six She attended schools in New York In 1994, she was baptized at first Baptist Church of Brooklyn NY; whereas she became a Minister of the gospel being ordained by Dr, Johnny Ray Youngblood Dr, Ann Taylor is an wife, Mother of five children and the grandmother of two an a caregiver to her 2 siblings, Dr Ann Taylor began her professional career as a servant, While in New York; Dr. Ann Taylor accepted her “call” to the gospel of Ministry in God kingdom In 1994 within this came the birth of Successful Start Inc Ministry for Re-Entry Citizens, Successful Start Ministry has grown in many ways; She advocates in many ways to helped the families and individuals to become strong men and women of God.

Dr, Ann Taylor is an active member of Triumph Church in Newark NJ where she is lead by Bishop Bitto,   Dr Ann Taylor has been appointed as an Minister of Education for triumph church, She also has been blessed to be given 2 Apostles Naomi Frazier,of Soul Saving Station for Jesus Christ in Brooklyn NY, as her Spiritual Mother God has called her to sit under this great woman of God for greater empowerment in leadership as well as Apostle Alfred Phillips of ABG as an spiritual father, Dr Taylor was Ordained as an Pastor in May 2014, Dr. Ann Taylor has been serving as an example on Many Ministries, Ann Taylor has attended Grace Deliverance School of Ministry where she graduated with Evangelism as an Outreach Pastor, Ann has received from Anointed by God Seminary an Master&#39;s in Religious Education as well as An Master’s of Science in Mental Clinical Health from Walden University then later receiving an Doctorate in Education from Walden University.

Ann Taylor is a woman of integrity, passion for the things of God and who believes in holiness and righteousness, her faith in God allows her to witness man’s impossibility becoming possible. In addition she is the Principal/Outreach Pastor for Philips Global Institute the K-12 to all this she found the time to volunteer in the Lehigh Valley for the Volunteer Center of Lehigh Valley and Bethlehem Police Department, Woman of Excellence board Counsel Committee in PA, Also Apart of National Women of Color Club, She has taken part of a leadership program for the racial ethnic diversity in Volunteer leadership, Dr. Ann Taylor is an Ordained Chaplain Instructor Dr, Ann Taylor is now a member of The Triumph church of New age in Newark where she serves as their Minister of Education since July 2017 under the Leadership of Bishop Milton Britto.